Medical Lab Management: What are the issues signaling the need for comprehensive, standardized labeling of human blood and tissue products?
Pat Distler: The first standardized coding system for blood products was called ABC Codabar, which was created in the late 1970s and implemented by blood banks beginning in 1980. Shortly after it was introduced, it became evident that while it was a major step forward in identification and communication, it had its shortcomings. One of the most significant was that it did not provide a globally, or even nationally unique identifier for each blood donation. Further, there was no on-going support to help the system evolve appropriately. Thus, once implemented, the system began to evolve differently around the world. Another, more technical problem was the unacceptable number of bar code misreads associated with its use.

Among the many users of the Codabar system, the US Department of Defense (DoD) took note of the negative effects of these shortcomings during the first Gulf War (1990-1991). On June 20, 1997, representatives from the DoD reported to the FDA’s Blood Products Advisory Committee that in theater operations, the military found thousands of labeling mistakes. These included: bar code substitution errors; absence or use of non-standardized donation identification start codes; improper or incorrect start codes in the FDA registration number; general noncompliance with the FDA’s 1985 Guideline for the Uniform Labeling of Blood and Blood Components; and duplication of donation numbers. All of this resulted in misidentification of units requiring manual data entry and unit renumbering, an increased opportunity for undetected error, and a decrease in productivity.1

There has never been a standardized coding system for human tissues, so the need is even more urgent in this area of laboratory practice. Hospitals that receive tissue products often resort to using manual systems (or develop a custom system) for tracking and tracing purposes, and also usually have to re-label the products with their own bar codes. As with most health care related practices, the use of manual systems and re-labeling of products create opportunities for error and are inefficient, whereas customized systems invariably add to cost.

MLM: Of the three product types most common to medical laboratories—blood, tissues, and cellular therapy (CT) products—which are the most difficult to convert to using ISBT 128?
Distler: Undoubtedly, the most difficult area to convert is tissue grafts. This is largely due to the greater complexity in how products are recovered (collected), processed, and distributed. When a donor is identified, a number of procurement organizations may respond—an organ procurement organization is usually the first to arrive, followed by an ocular recovery team, and then another team to recover other tissues. So, unlike blood and CT, there is not a single organization responsible for obtaining tissue products, thereby making it a challenge to assign a single Donation Identification Number (DIN) across all tissues recovered from the donor. Furthermore, the organization that recovered the non-ocular tissue may send it to multiple tissue processors, such as those that handle musculoskeletal tissue, cardiac tissue, and nerve tissue. While blood banks and CT facilities generally ship directly to a hospital, tissue grafts may go through a distributor. To further complicate the issue, tissues may be regulated either as biologics or medical devices and the requirements for labels are different based on how the products are regulated.

The bottom line is, when multiple organizations and computer systems are involved, it becomes increasingly difficult to convert to a single system of coding and labeling. Regardless, standardized labeling is a goal worth pursuing for tissue grafts. As with CT products, tissue grafts have international distribution. Because of this, common coding and labeling is an initiative supported by the World Health Organization (WHO). The WHO website has published information encouraging the global implementation of ISBT 128 for the labeling of medical products of human origin (MPHO) which they define as blood, organs, bone marrow, cord blood, corneas, tissues, reproductive cells, and milk.2,3 ICCBBA is a nongovernmental organization (NGO) in official relations with the WHO and is working to support the global adoption of ISBT 128 for MPHO.

With this in mind, a significant challenge to the adoption of ISBT 128 for tissue grafts in the US is the lack of an industry-wide agreement to standardize coding. Hospital users concerned with the difficulties posed by lack of standardization in tissue graft identification and coding need to encourage tissue processors to move forward with adoption of ISBT 128 to improve traceability. 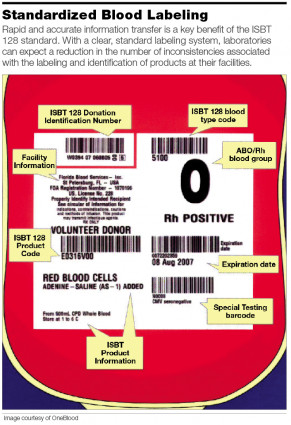 MLM: Are clinical laboratories required to implement ISBT 128?
Distler: AABB accredited facilities have been required to use ISBT 128 on blood products since 2008 and CT facilities are currently required by AABB and the Foundation for the Accreditation of Cellular Therapy (FACT) to use ISBT 128 terminology on their products. While bar coding is not required for CT products, both AABB and FACT require facilities to have an implementation plan in place to support full conversion to ISBT 128 in the future. Today, many CT facilities have implemented ISBT 128 or are in the process of doing so.

There is currently no requirement for tissue banks to use ISBT 128 and no US tissue bank is doing so. However, tissue banks in other parts of the world (United Kingdom, Poland, Austria, Denmark, and Canada) either have implemented ISBT 128 for labeling of tissue grafts or have plans to do so. The Eye Bank Association of America (EBAA) has joined other international eye banking societies to encourage its members to adopt ISBT 128 for the labeling of ocular tissue and has recently decided to include ISBT 128 terminology in its standards.

The Human Milk Bank Association of North America, along with other global milk banking associations, has endorsed the use of ISBT 128 to label human milk. One milk bank in Scotland and one in Canada are already labeling human milk with ISBT 128.

MLM: What expected benefits can clinical laboratories expect to realize with the adoption of ISBT 128?
Matt Delgado: Rapid and accurate information transfer is a key benefit of the ISBT 128 standard. With a clear, standard labeling system, laboratories can expect a reduction in the number of inconsistencies associated with the labeling and identification of products at their facilities. An additional benefit is the availability of online resource tools for quick product and facility identification.

Translating between languages is a non-factor with ISBT 128. When receiving products from ICCBBA-registered facilities around the world, facilities can quickly identify product information (without regard to the label language) through the use of bar codes, and common reference tables for interpretation of the bar codes. This can be especially important for CT products, which are often shipped across international borders.

In addition, there are a number of vendors licensed with ICCBBA whose software and equipment can facilitate a smooth transition when adopting ISBT 128. This allows for forward and backward traceability from collection to transfusion. In addition to the unique DIN, laboratories have the ability to capture other data content, including expiration dates, product codes, and ABO and Rh type using ISBT 128 data structures. In the future, blood labels likely will come with other red cell antigens encoded into bar codes.

For any ongoing questions or concerns, ICCBBA is available to assist with most issues that arise during the adoption of ISBT 128. For example, new product codes may be requested by users to identify specialized products (especially products intended for use with neonates) that are made by transfusion services.

MLM: Are there any new or expected changes on the horizon for ISBT 128 as it relates to clinical laboratory operations?
Delgado: Perhaps the most significant change we foresee in the future will be the use of new delivery mechanisms—two-dimensional (2D) bar codes and radio frequency identification (RFID) tags on blood components. Recently, 2D bar codes have emerged as a popular option for storing data in several different health-care-related fields. One benefit of using 2D bar codes is that data from multiple linear bar codes can be combined into one 2D symbol. Although its use is not yet widespread in the labeling of MPHO, some facilities are using this delivery method for labeling items such as cryogenic vials that do not have adequate space for traditional linear bar codes. Use of 2D bar codes should help foster greater efficiency in the laboratory (eg, scanning one bar code instead of four or five) and make the label easier to read with more space for text. Keep in mind, the ability to read 2D bar codes requires the use of imaging scanners capable of reading both linear and 2D bar codes. Laboratory managers should consider purchasing 2D-capable scanners as older scanners are replaced.

RFID is a technology that uses radio waves for a data exchange between a tag and a reader. This mechanism is expected to supplement, but not replace traditional bar codes. However, although the technology exists, there are several obstacles that need to be addressed before the method can be realistically implemented in blood centers. Recently, the FDA has taken steps to study the possibility of electromagnetic interference between RFID technologies and other medical devices.⁴ This risk, along with cost effectiveness, are just a couple of factors that will need to be researched further before widespread adoption of RFID becomes a reality. Ultimately, in the case of either 2D bar codes or RFID tags, facilities would need to perform validations, provide training, and update SOPs to use these delivery mechanisms and the associated software.

Patricia Distler, MS, MT(ASCP)SBB, has been the technical director for the International Council for Commonality in Blood Bank Automation (ICCBBA)—the organization that manages the ISBT 128 information standard—since 2005. Prior to working for ICCBBA, she was the vice president of operations at the Blood Bank of San Bernardino and Riverside Counties from 1984 to 2004. Pat received her BS in medical technology from the University of Sioux Falls, South Dakota, and her MS in Immunohematology and specialist in blood banking certification from the University of Cincinnati.

Matthew Delgado, CQA(ASQ), is the global development manager for ICCBBA. Prior to working for ICCBBA, he was a senior clinical cell therapy specialist for the University of Texas, MD Anderson Cancer Center Cord Blood Bank. He also has been a volunteer cell therapy assessor for AABB since 2012. Matt received his bachelor’s degree in biology from Baylor University in 2008. 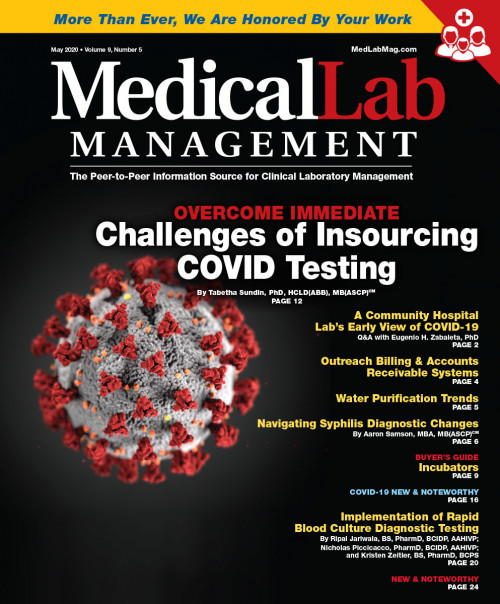