After moving into a newly constructed hospital—Virtua Voorhees in Voorhees, New Jersey—the laboratory began documenting a 6 to 10 percent hemolysis rate in plasma and serum specimens received from all areas of the hospital. This rate of hemolysis necessitated numerous specimen recollections resulting in customer and laboratory staff dissatisfaction, delayed turnaround times for results, and a generally undesirable perception of laboratory performance. Initial observations suggested a correlation between pneumatic tube use and specimen hemolysis, and through a controlled study, it was determined that the physical factors of delivery speed and multiple starts and stops during transport were the likely common causative factors contributing to the hemolysis rate. Installation of variable speed blowers to reduce carrier speed within the system dropped our overall specimen recollection rate to less than 1 percent, resulting in approximately 12,000 fewer phlebotomies per year.

In May 2011, Virtua Voorhees relocated from an older facility to a state-of-the-art, 398-bed, 680,000-square-foot regional medical center that provides specialized, high-level care in a patient-centric environment. The new clinical laboratory was designed using an open concept model without walls separating the various laboratory disciplines. A robust pneumatic tube system (PTS) is centrally located to all laboratory testing areas and allows for quick and efficient distribution of specimens incoming from the 50-plus PTS stations located throughout the hospital.

In late 2011, the chemistry department initiated a process improvement effort intended to revise the procedure for addressing specimen integrity issues, and to improve consistency and remove subjectivity in the handling of hemolyzed specimens. To improve consistency, the degree of hemolysis at which point test results would become unreliable was defined as a hemoglobin concentration of greater than or equal to 250mg/dl of free hemoglobin in solution, as determined by the testing platform (see IMAGE 1). An unfortunate, yet understandable side effect of this tightening of the definition of hemolysis was the perception of an increase in the number of hemolyzed specimens received in the chemistry department. This perception was exacerbated by concerns from other medical staff over the concomitant increase in requests for specimen recollection.

Over a one-month period, an audit was performed comparing hemolysis rates demonstrated at the multiple Virtua hospital sites. The results confirmed a higher rate of hemolysis at Virtua Voorhees compared to the other Virtua hospital laboratories (see TABLE 1). When discussing the possible causes of the significantly higher hemolysis levels at Virtua Voorhees, laboratory leadership considered several factors common to phlebotomy practice. In researching these factors, we found no significant difference in hemolysis rates based on the skill of the staff performing phlebotomy—experienced versus novice phlebotomist, or nursing-collected versus laboratory-collected specimens. Specimen collection tube lot number and expiration date variabilities also were contemplated as potential contributing factors, yet this theory was ruled out given the centralized supply model within the organization whereby all hospitals were using the same lot number of tubes. Ultimately, the lone factor we examined that we were unable to rule out as a potential contributing factor to hemolysis was the method of transporting specimens to the laboratory—hand carry versus pneumatic tube transport.

In order to investigate the impact of the different transportation methods on hemolysis rates, the first step was to reach out to our pneumatic tube vendor to discuss the issue of specimen transport and hemolysis, and seek their advice and guidance. At our initial meeting, it was suggested that improper packing of specimens in the transport carriers (ie, insufficient foam packing for specimen immobilization) was most likely the primary cause.

With this in mind, we began a study to gauge the potential connection between the packing of specimens for transport through the PTS and subsequent hemolysis. Over the course of normal operations, three lithium heparin tubes of blood were collected from each of 60 patients and hand-carried to the lab. One tube from each patient was used for control purposes (as the hand-carried sample), centrifuged immediately, and measured for degree of hemolysis. The remaining two tubes from each patient were taken to various locations within the hospital and re-sent to the lab via the PTS, using two different transporting conditions—one in which the carrier was sent improperly packed with inadequate foam packing, and the other sent with the manufacturer recommended packing (see IMAGE 2). 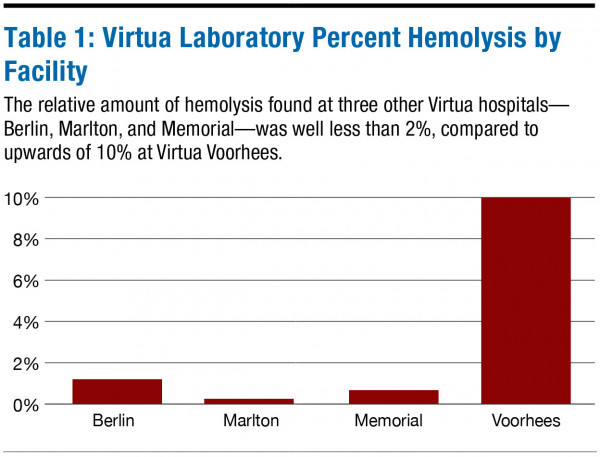 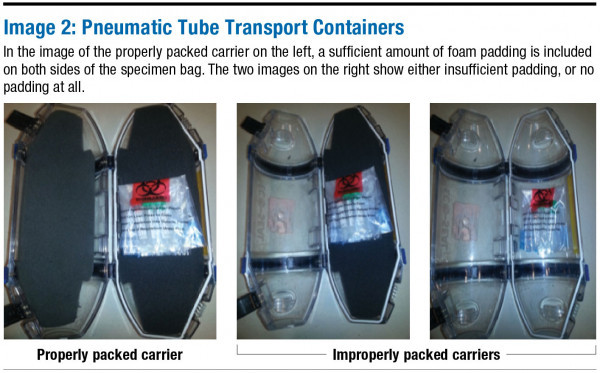 After the study, a second meeting was held between our PTS vendor representatives, laboratory management, and plant operations. This time, discussion focused on the velocity and dynamics of carrier transport during specimen delivery. After inspecting the system’s settings, we discovered the velocity settings were set to handle the heaviest materials that were expected to be delivered via the PTS—IV fluid bags, medications, and blood products for transfusion. The velocity of the carriers within the system was determined to be 32 feet per second.

The next step was to research whether there was evidence of other hospitals encountering issues with PTS use and hemolysis. Although this research did not reveal any supporting data from hospitals within the United States, it did find multiple studies published in other countries; one in particular suggesting an optimal PTS speed for transport of blood specimens to be 8 feet per second.1

Taking this information to the PTS vendor, it was hypothesized that in order to reduce hemolysis, a variable speed blower system could be applied to each zone within the PTS to reduce the air pressure, and therefore the speed by which the carriers are sent through the system (with an approximate cost to Virtua of $4,000 per zone with 7 total zones). The purpose of the variable speed blower was to slow down the specimens arriving to the lab while maintaining the faster velocity for heavier objects being transported to other areas serviced by the PTS.

Due to the projected total cost associated with installing variable speed blowers on all PTS zones, it was decided to pilot one variable speed blower in the PTS zone that serviced the outpatient and preadmission testing areas to determine its effectiveness. Data was collected on the effect of this change with the expectation that the number of hemolyzed specimens would decrease. Over a period of 10 days, 300 patient samples were sent from the reconfigured zone to the lab. Hemolysis rates were measured for these samples and only three out of the 300 samples were found to be hemolyzed above the 250mg/dl limit (see TABLE 3). Again, a test of proportions was performed resulting in a calculated p-value of 0, thereby demonstrating that the installation of the variable speed blower made a statistically significant difference in lowering hemolysis rates to those levels found at the other Virtua laboratory sites. 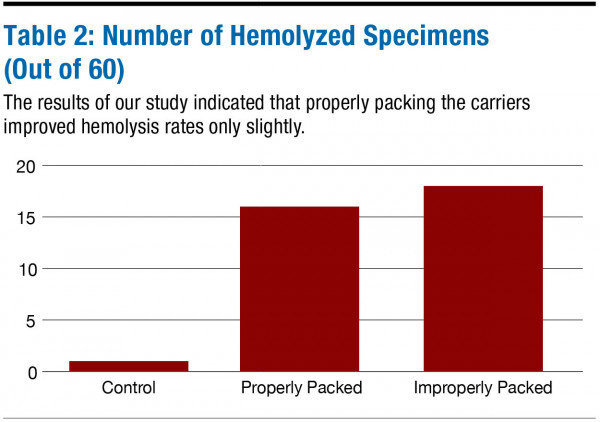 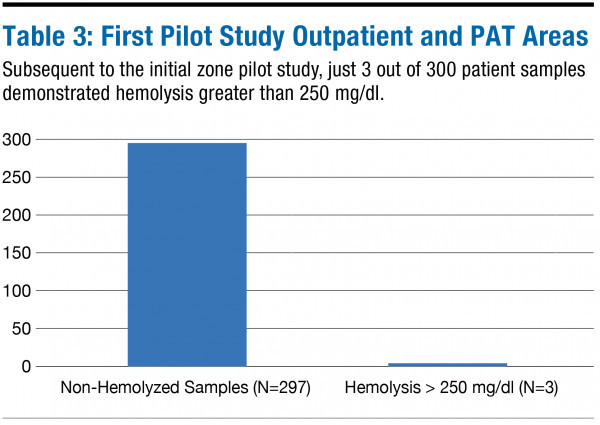 Success of the first pilot test led to the installation of variable speed blowers in the remaining six zones in the system. A repeat study was performed using 52 samples, which were sent through the remaining six zones; only two out of these 52 samples demonstrated hemolysis. It is significant to note that the degree of hemolysis for these two specimens was below the criteria for specimen rejection (ie, less than 250mg/dl), therefore, no specimens required recollection during this last study (see TABLE 4).

A final test for proportions was calculated to determine whether there was a statistically significant difference between hemolysis rates necessitating specimen recollection pre– and post-insallation of the variable speed blowers. The results of this test showed a p-value of 0.00209, demonstrating a statistically significant difference in hemolysis rates resulting in specimen recollection (see TABLE 5). 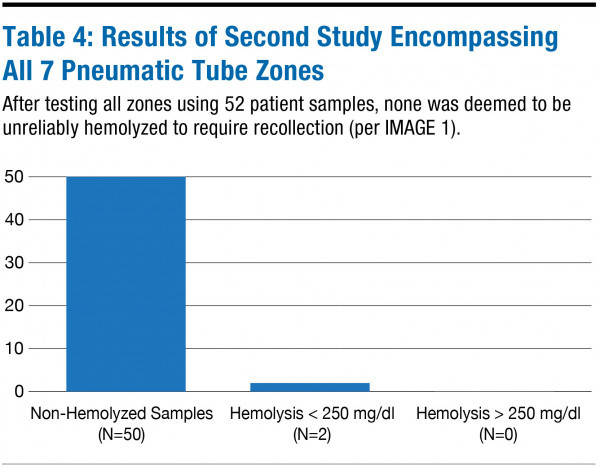 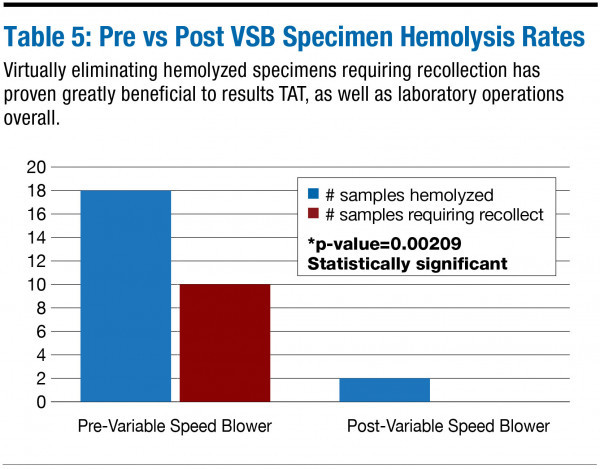 The installation of variable speed blowers at each transfer station (zone), and the resulting decrease in the speed of specimens sent to the laboratory via pneumatic tube, has been effective in reducing the measured hemolysis of blood specimens to an acceptable level comparable to other Virtua facilities. Virtua Voorhees realized a 9 percent reduction in its specimen recollection rate, thereby preventing approximately 12,000 re-draw phlebotomies per year (32 per day). This reduction in re-draw phlebotomies has an obvious and directly beneficial impact on results turnaround time, and has resulted in fewer clinical staff complaints and improved ability to meet customer expectations.

A pneumatic tube system for transport of laboratory specimens is a valuable tool, but laboratories must consider the overall impact of this type of transport system and its potential effect on pre-analytic specimen integrity. The Virtua Voorhees study demonstrates the necessity of proper planning and a robust validation when designing and implementing a pneumatic tube system. Fortunately, the end result has been a boon to laboratory operations.

Bradford Heath, BS, MT(ASCP), is the chemistry technical manager at Virtua Corporate Laboratory. With oversight of five chemistry departments, he is responsible for the standardization of all chemistry-related processes.

Judy Topper, BS, MT(ASCP), serves as the operations director at Virtua Voorhees Laboratory. With almost 40 years experience working in the hospital lab, she was integral in leading the move to a new hospital in 2011, and has managed several successful Lean project initiatives.

Karen Walsh, MS, MT(ASCP), CPHQ, CLSSMBB, is the assistant vice president of Virtua Corporate Laboratory, having formerly served as the laboratory quality director. A certified Lean Six Sigma Master Black Belt for the organization, she focuses on continuous process improvement and has lead numerous Six Sigma projects, including a recent project on the effects of CPOE on managing unfulfilled test orders.

Impact of the Pandemic on Laboratory Design 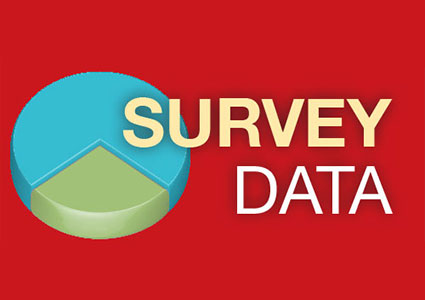 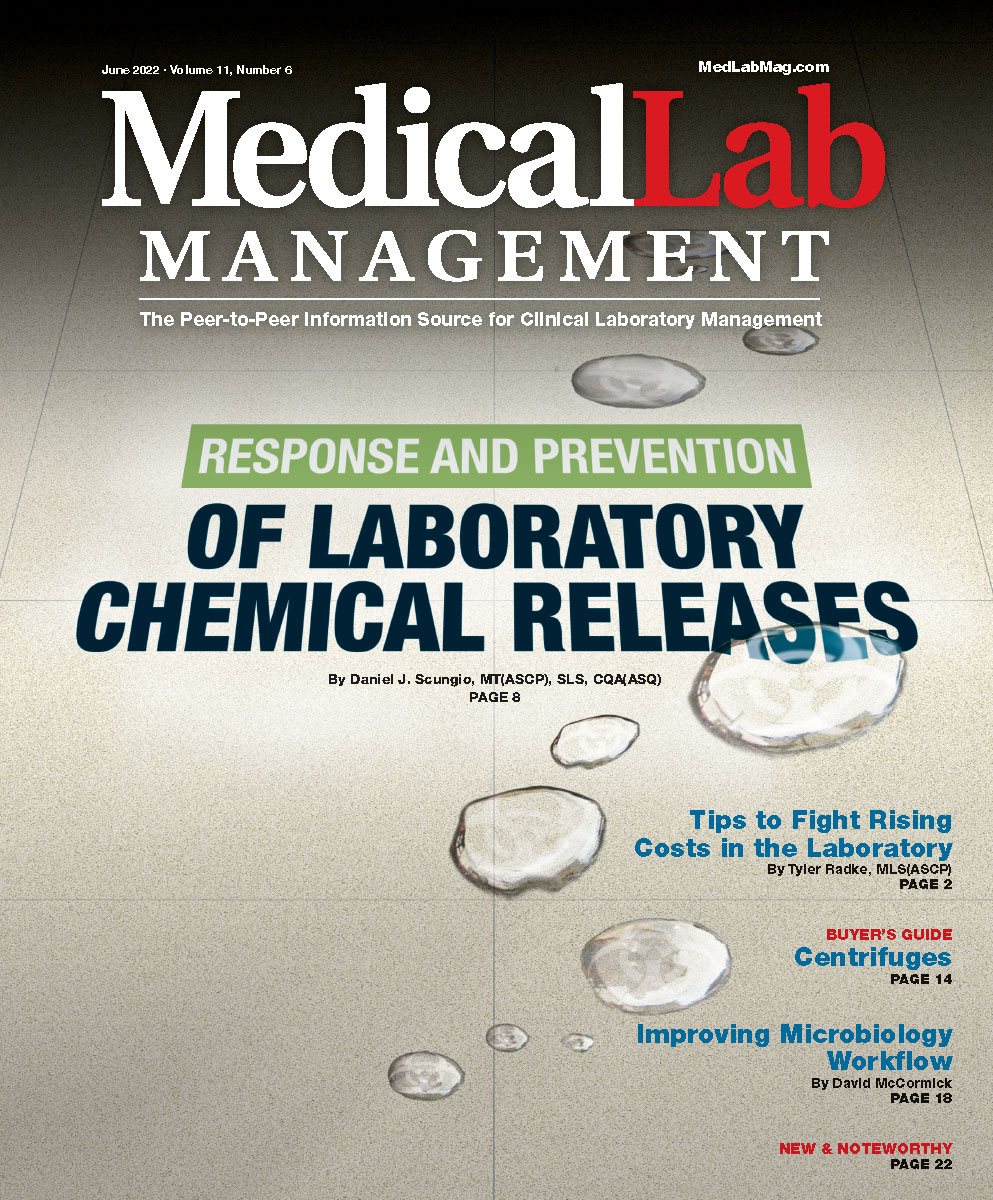 © 2005 - 2022 MLM Magazine - MedicalLab Management. All rights reserved.
www.medlabmag.com uses tracking technologies. The site may also include cookies from third parties. By continuing to use this website, you consent to the use of tracking technologies as defined in our Privacy Policy that can be read by clicking here.