Is Liquid Biopsy in Oncology Ready for Prime Time?

For a brief historical perspective, the first report on the presence of nucleic acids in human plasma was published in 1948,1 and in 1965, it was postulated that the metastatic spread of cancer may possibly be favored by circulation of tumorigenic DNA in the bloodstream.2 A decade later, it was revealed that blood DNA levels increased in cancer patients with high tumor burden and suggested that cell-free DNA in the serum may be an important tool for the evaluation of different therapy regimens and assessment of their efficacy.3

Further study demonstrated in 1989 that plasma cell-free DNA can be isolated from patients with various malignant diseases and is not present in normal controls.4 This is in contrast with serum protein biomarkers such as CA-125 (cancer antigen 125), CEA (CarcinoEmbryonic Antigen), and PSA (Prostate Specific Antigen), which are known to be elevated in cancer patients but are also present in the normal population, albeit at lower concentrations.5 These findings triggered an increased interest in establishing a clinical test to monitor cancer patients using DNA from blood samples.

The bloodstream of healthy individuals contains cell-free DNA (cfDNA) released by normal hematopoietic cells (both myeloid and lymphoid) during circulation through the process of apoptosis and necrosis. It can be cleared from circulation in less than 20 minutes by rapid degradation or filtration. When measured, these double stranded DNA fragments were found to be short (ie, less than 200 base-pairs [bp]) with two size peaks corresponding to nucleosomes (~147 bp) and chromatosomes (nucleosomes plus linker histone; ~167 bp), and harbor footprints of transcription factors that can identify cell origin.6

In the context of different physiologic conditions such as cancer or pregnancy, a proportion of cfDNA may be derived from a distribution of tissues other than blood. This process has been utilized in recent years to achieve non-invasive screening tools for the diagnosis and management of disease.7 In the case of cancer, a percentage of cfDNA is derived from circulating tumor DNA (ctDNA), fragments of which are shed into the bloodstream by tumor cells also undergoing apoptosis or necrosis, or secretion of exosomal DNA, and their concentration directly correlates with tumor staging and prognosis. Their release is dependent on the location, size, and vascularity of the tumor, perhaps accounting for the frequently observed variability in ctDNA levels.8 Moreover, ctDNA sequencing (eg, next-generation sequencing [NGS]) is expected to detect all types of genomic abnormalities found in cancer, such as single nucleotide substitutions, copy number variants, and structural rearrangements.

Over the past 5 years, the promise of cancer screening using liquid biopsy has drawn a spotlight in the national media with articles published in the New York Times and the Washington Post capturing the public’s attention. Note that the identification of cfDNA has potential medical actionability in both prenatal and cancer screening. However, herein we will discuss the concept of liquid biopsy using cfDNA in cancer screening and therapy, especially in the context of non-small cell lung cancer (NSCLC), as well as the promises and pitfalls of this emerging clinical application.

The interest of the medical oncology community in liquid biopsy emerged from the challenges often encountered in the acquisition of tissue specimens. These include tumor heterogeneity and sampling bias of a single lesion within a single anatomic site, difficulty in reaching the tumor site (eg, lung cancer), and the fact that resected tumors may not have the same molecular signatures as metastases, which are usually the key targets for systemic cancer therapies.8

In addition, accessing the bloodstream has clear advantages, including the procurement of fresh DNA unhampered by fixation and preservatives, and the minimally invasive nature of the procedure (compared to the common dangers of taking tissue biopsies). Furthermore, blood can be drawn at any time during the course of therapy, thus allowing for continuous monitoring of molecular changes in the tumor rather than relying on a static time point.9

With these advantages in mind, the primary applications of liquid biopsy in the clinical oncology setting include the following:

Although most localized cancers can be cured via surgery alone, once metastasis occurs, surgical resection is almost never curative. Therefore, the main goal of cancer screening is the detection of disease before it metastasizes. Accordingly, the success of a cancer screening program using liquid biopsy depends on several defined components. First, the characteristics of the cancer in question must be delineated, including the extent of disease and the availability of effective treatment or efficacy of early detection to warrant a screening program. Second, the screening test needs to have high specificity and sensitivity, and be cost-effective. Further, akin to other available cancer screening programs (eg, pap smear, colonoscopy, mammography), disease prevalence, socioeconomic burden, and availability of resources for confirmatory tests contribute to the success and feasibility of cancer screening via liquid biopsy.10

When working with NSCLC, where few hot spot EGFR variants comprise the majority of activating mutations, and tumor accessibility and heterogeneity pose significant challenges, successful exploitation of liquid biopsy has been well documented in concordance studies.11 In one study published in 2017, comparison of NSCLC patient DNA from tissue samples with cfDNA yielded 97% concordance using an NGS panel of 39 genes, but only in patients with metastatic disease.12 This was consistent with the fact that metastatic burden directly correlates with increased concentration of ctDNA.

Other applications of liquid biopsy include the monitoring of treatment response and/or detection of resistance variants, especially in the case of NSCLC disease progression. In addition, various mechanisms for resistance to therapy have been elucidated using liquid biopsy. This is demonstrated particularly in the frequent acquisition of the EGFR T790M resistance variant in ctDNA following administration of first generation tyrosine kinase inhibitors (TKI), or the lack thereof in cases of transition of NSCLC to small cell carcinoma also leading to TKI resistance.13

In an effort to provide an objective assessment of the accumulating evidence on ctDNA analysis in oncology and present a systematic framework to help guide future clinical practice guidelines, the American Society of Clinical Oncology (ASCO) and the College of American Pathologists (CAP) convened an expert panel to conduct a systematic review of the liquid biopsy literature. In their ensuing publication,14 they described in detail the three components critical to the assessment of liquid biopsy clinical significance:

While it was evident that published data show credible promise for this testing methodology both in improving patient outcomes and decreasing invasive and potentially dangerous procedures, it was equally clear from the joint review that several variables are in dire need of further elucidation. These include preanalytical variables related to specimen collection, stability and patient-related biologic factors (eg, pregnancy, autoimmune disorders, and heart disease), analytical variables such as lower limit of variant detection, cross-assay comparisons and interpretation/reporting of both positive and negative results, and the potential discordance with tissue biopsy.

These variables need to be addressed both by clinical laboratories seeking to validate this assay for clinical testing and/or through large clinical trials where both liquid and tissue biopsies are procured and compared prospectively. Other considerations that may influence the reliability and clinical applicability of liquid biopsy include the ultimate concordance of liquid biopsy with tissue biopsy results (the current accepted standard) across all cancer types, not just in NSCLC, for which studies are the most abundant.

Other biological factors may hinder our ability to utilize liquid biopsy in routine clinical testing. For example, although current evidence suggests that ctDNA likely represents a fairly accurate molecular proxy of the overall cancer, it remains to be proven formally that multiple metastatic lesions located in different organs shed ctDNA homogeneously and can accurately predict response to therapy.9 Moreover, although various studies show that metastatic disease sheds more ctDNA in the blood, the variants may still be present at very low levels (0.1% and 1% variant allele frequency), and laboratories embarking on validations of ctDNA assays need to develop a level of assay sensitivity that is generally not available when using routine single-gene or NGS assays designed for tissue testing.11

Keeping all of this in mind, it remains evident that the marked improvement in our knowledge of tumor biology and progression, the continued development of molecular targeted therapies by pharmaceutical companies, and the increase in the number of innovative testing platforms to detect and analyze cfDNA from blood samples have provided an optimistic view of the future of liquid biopsy. These developments have allowed the field of oncology to commit immense resources in the form of clinical trials and national funding to study the feasibility of applying liquid biopsy testing in routine cancer care. In the case of NSCLC, it is already clear that tumor variants can appear in the blood long before radiographic relapse becomes apparent, and the promise of early detection and better patient outcomes may outweigh testing limitations.11

By extension (and with technology and data permitting), a blood-based screening test utilized with high-risk patient populations may lead to detection of cancer before it becomes clinically apparent. When this promise is ready for prime time, responsibility for ensuring careful management of this testing will fall to clinical laboratorians. This responsibility includes attaining the appropriate expertise for performing and reporting test results (from education of technologists to laboratory directors certified in molecular genetics or molecular pathology), ensuring its availability to all patients regardless of socioeconomic status, and enabling reimbursement by insurance payers. Ultimately, access to reliable and affordable ctDNA testing will surely represent an important and impressive step toward improving global outcomes for cancer patients.

Yassmine Akkari, PhD, FACMG, is the scientific director for cytogenetics, the technical director for molecular pathology, and manager of genetics laboratory operations at Legacy Laboratory Services in Portland, Oregon.

Liquid biopsy: Examination of plasma ctDNA for genetic alterations that are present in the tumor tissue

Applications of Liquid Biopsy in Oncology 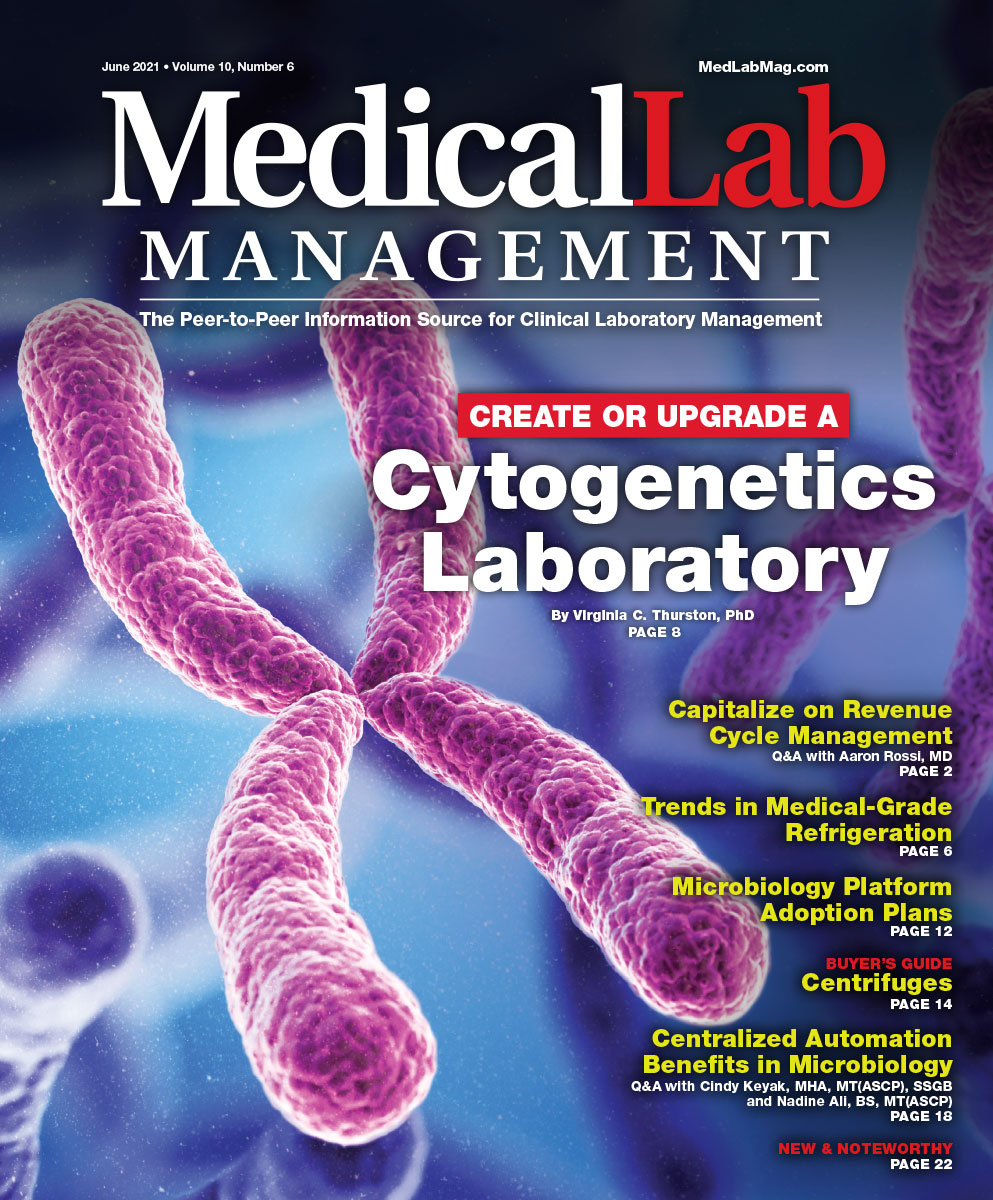