The practice of reporting prothrombin time (PT) results expressed as an international normalized ratio (INR), introduced in the early 1980s by the World Health Organization, was the first major step taken to stabilize results across differing reagent/instrument combinations. Prior to this time, results reported only in seconds could vary widely from lab to lab—a patient went to Hospital A that used coagulation Instrument X that produced a 10.0 second result, then went to Hospital B using Instrument Y, producing a 13.2 result. This could lead to over- or under-medicating the patient, depending on the lab. The INR solution, for the most part, alleviated this problem.

Nonetheless, even with the introduction of the INR, the sensitivities of the early-use thromboplastin reagents still varied widely, due in large part to being made from animal sources and a lack of firm control over the international sensitivity index (ISI).1 Given that thromboplastins were originally tissue extracts made from different animal sources and organs, the introduction of recombinant tissue thromboplastin was a second major step to standardization of PT results. These recombinant thromboplastins, made from recombinant human tissue factor produced in E. coli, are now used by virtually all clinical laboratories for measuring INR results, and laboratorians are familiar with their stability and reliability.

The system is not perfect, however. Linearity problems have been reported involving patients with high INR values and recombinant thromboplastins may be overly sensitive to changes in factor VII levels.2 In addition, finding suitably screened, normal donors for each new lot calculation can be problematic and is another potential source of error. An alternate approach to the INR calculation could minimize several practical problems in reporting PT results.

Aside from the minor drawbacks mentioned above, it has been possible to stock reagents with very small variances in sensitivity from lot to lot, as well as ISIs that are generally close to 1.0. This stability (which did not exist when the INR was first initiated) raises the question of whether parts of the WHO protocol, specifically those dealing with establishing a patient mean (the denominator in the INR calculation), could afford to be modified in certain cases. Specifically, if an instrument-reagent combination has been shown to be stable over a period of several months or years in a given lab, could an alternate method to calculate patient mean be useful if there is a reasonable need to do so? Herein we discuss an alternate method of calculating INR that is shorter, easier, and could be useful under the following conditions:

The alternate method uses a target INR based on the current lot of reagent and back calculates the patient mean (the denominator). The calculation is as follows: 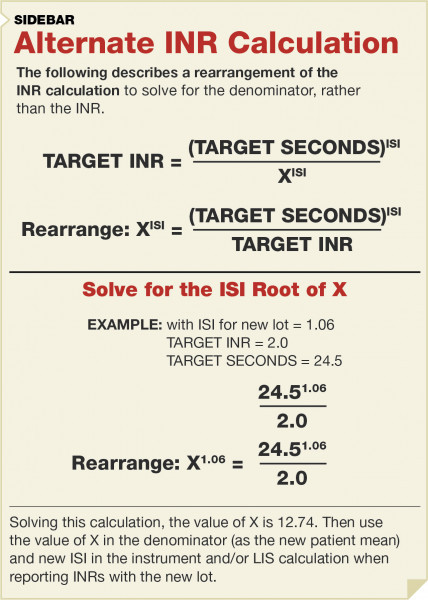 This method could have several advantages over the traditional method:

Of course, challenging a long-established protocol is a difficult endeavor and regulatory cooperation would ultimately need to be established.

Most hospital laboratories have encountered a situation involving a depleted thromboplastin reagent supply resulting in having to acquire reagents with a different lot number and ISI. Furthermore, many labs run into problems procuring good, normal donor samples. These situations present real challenges to reporting critically needed coagulation results in a timely manner. Accordingly, this alternate method is offered for consideration as a possible temporary solution to several real-life coagulation challenges, in light of advances in reagent manufacturing since the 1980s.

Roy Midyett, MT(ASCP), recently retired from PIH Health Hospital in Whittier, California, where he served as supervisor of hematology, coagulation, and urinalysis.

A Perfect Time to Renew!

The Laboratory Is a Port in the Storm 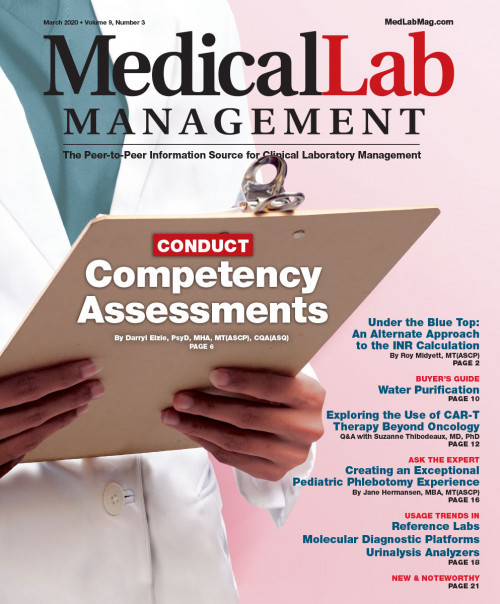