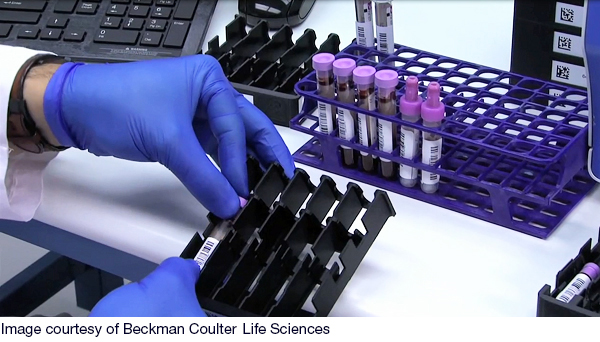 Among other disciplines, the flow cytometry department at Clinical Pathology Laboratories (CPL) has been performing clinical immunophenotyping testing since 1999. Over the last two decades, this testing has focused largely on the enumeration of lymphocyte subset cells in order to aid in the diagnosis and treatment of immune diseases, namely AIDS.

A key manifestation of HIV infection progression is the depletion of T-helper lymphocyte (CD4+) cells which are indicated by a low CD4/CD8 ratio and low CD4+ absolute count.1 Altered percentages of CD3+, CD4+, CD8+, and/or CD19+ lymphocytes after organ transplantation suggest these measurements may be useful in monitoring these populations. CD3-(CD16/56)+ lymphocyte populations have also been identified as capable of non-MHC restricted cytotoxicity against tumor and virus-infected cells.2 The fluorescence intensity level of individual cell surface markers can vary depending on staining and cell preparation so tight controls over standardized processes are essential.3

In the late 2010s, CPL administration decided to revisit our flow cytometry instrumentation and workflow with a goal of improving both. By 2018, our instrumentation was dated by modern standards and required increasingly costly maintenance more frequently. With annual service visits increasing to over 17 per year and crucial replacement parts becoming scarce, an update was necessary.

In performing a review of our initial flow cytometry workflow (ie, in early 2018), we determined a total of 14 steps were required from specimen preparation to result release (see FIGURE 1). Many of the required steps were viewed to be non-value-added and the established workflow necessitated the dedication of at least two FTEs over an extended work day. Further, the outdated instrument interfaces were not compatible with the latest version of our LIS, requiring manual labeling of specimen tubes and subsequent manual entry for all results. A significant portion of the department budget was dedicated to printer cartridges and paper. Perhaps most concerning, there were a few times when biohazardous exposure was possible through the handling of open specimen tubes. These factors encouraged us to update our flow cytometry technology and add more automation into the equation.

A Proposal for Improvements

Reviewing the sustainability of flow cytometry testing in the past indicated that both supporting infrastructure and specimen volume are determining factors in justifying technology purchases.4 In addition, the highly specialized nature of flow cytometry continues to maintain barriers of entry for leukemia lymphoma phenotyping, minimal residual disease (MRD) testing, and immunodeficiency analysis, among others. Significant outlays for validation time and technical resources are required even before the lab is operational. Additional barriers include staff competency, capital equipment and reagent costs, and overhead costs such as instrument service contracts, calibration, and maintenance activities. Therefore, introducing automation in this area must be based on supporting criteria. No automation project will fit all needs perfectly, but significant advantages can be gained if there is a need.

In 2018, CPL began vetting new flow cytometry instruments and was introduced to the instrument we would end up acquiring. In reviewing this technology against our existing systems, we determined some benefits to our program would include:

Vendor representatives conducted a workflow study for one full day in order to obtain comparisons between initial-state and future-state operations involving instrumentation setup, sample preparation, sample acquisition and analysis, and data entry and verification. During this observation day, the flow cytometry lab performed analysis on 103 total specimens from preparation to results release. A previous study with a similar workflow indicated the new instrumentation would require almost half of the total time as the legacy platform to perform these same actions.5 Likewise, the total number of steps from startup to shutdown was projected to be reduced by over 50% (see FIGURE 2). In reviewing this study and our own data, we anticipated our workflow would follow suit with similar data and subsequent recommendations (see FIGURE 3). 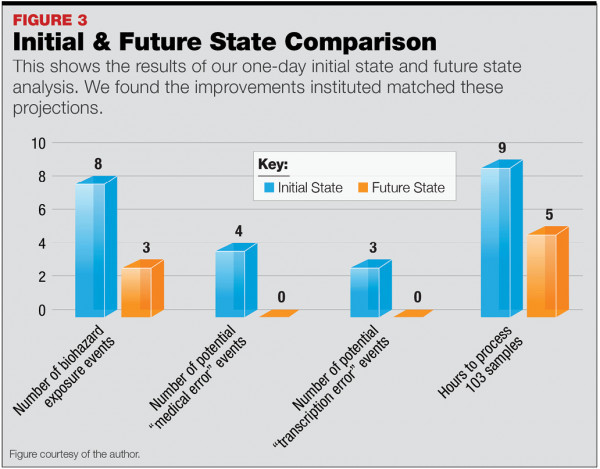 With the workflow data and capital equipment quote in hand, we proposed that there would be significant savings for both labor and material with an ROI of less than five years. In the last 11 months since the project went live, there has been an annualized savings of over $11,000 in printer cartridges alone, due largely to paperless data entry. New labor efficiencies also have allowed for a reorganization of responsibilities in the department. The ability to fully interface with our LIS has eliminated result changes after release and training has been streamlined due to the simplicity of instrument operation. Our staff is now able to focus more attention on quality-related factors that could impact test performance, including specimen stability, cellular response to drug therapy, and gating techniques.

The introduction of automation into clinical operations is not a panacea, but it has the potential to provide numerous short- and long-term benefits. That said, it is wise to know what improvements would best suit your specific flow cytometry operation before implementing a new system. Thus, working closely with vendor partners during the capital equipment request process to understand and identify specific areas of improvement is essential.

These expectations can be contractual, but more often than not, a workflow study with actual data primarily provides prospective users with a clearer understanding of the potential impact of automation improvements. We have been satisfied with our instrument decision and implementation; further, we are hopeful this workflow study and data collection process can be utilized for future automation improvements throughout the laboratory.

Aaron Samson, MBA, MB(ASCP)CM, is the hematology operations manager at CPL in Austin, Texas, where he oversees staff in various areas of specimen testing. Prior to joining CPL in 2012, Aaron performed high complexity flow cytometry and molecular testing at the University of Kentucky Medical Center. He has experience with lab automation implementations, project management, and process improvement.

WHERE TO FIND: Flow Cytometry 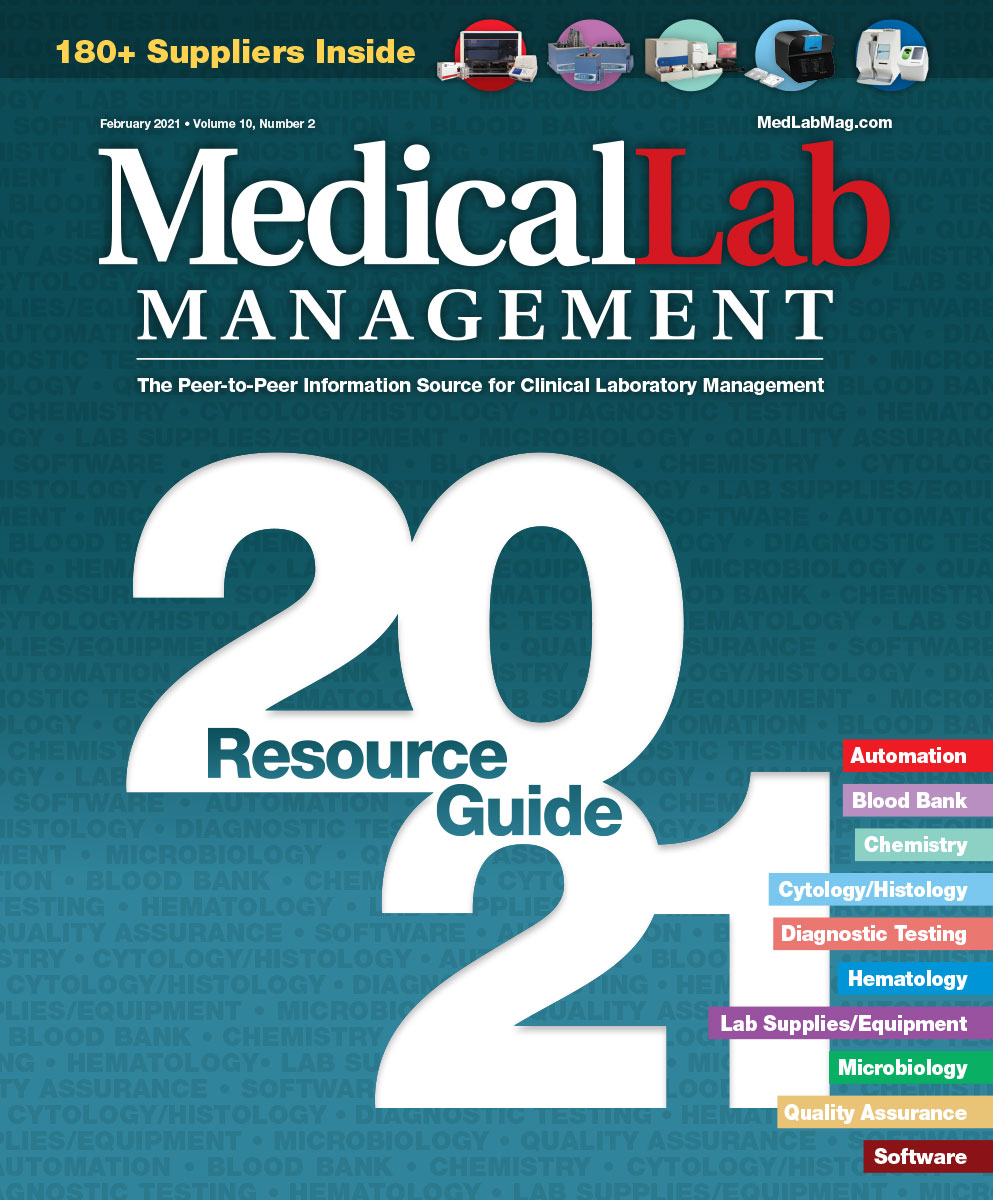