The Promise of Next Generation Cytogenetics: Optical Genome Mapping 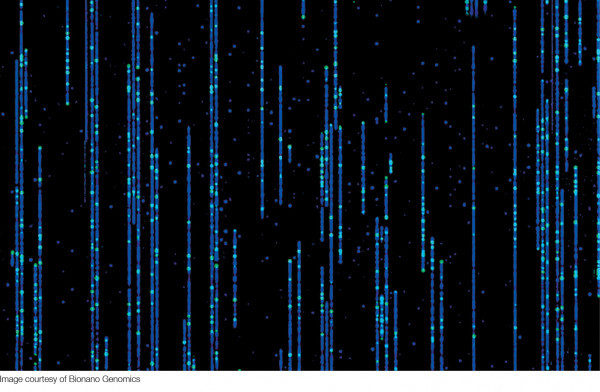 Cytogenetics is the science of chromosome structure, behavior, and role in inheritance. It was first described by Walther Flemming in the late 1800s when he demonstrated that chromosomes are threadlike structures correlating with chromatin. As the science and practice of cytogenetics continued to evolve into the 20th and 21st centuries, it has become an important branch of medical genetics. This evolution was mostly aided by the discovery of the number of human chromosomes and the discovery and evaluation of diseases associated with abnormal number and structure of chromosomes. Given the substantial value of these discoveries, it is important to understand the various technologies that can be utilized in clinical cytogenetics laboratories, and to keep an eye on the emergence of a new technology that promises to revolutionize the field of cytogenetics—optical genome mapping.

It has long been known that chromosome abnormalities are the basis for a variety of human disorders, both germline (prenatal and postnatal) and somatic (hematologic malignancies and solid tumors). These abnormalities can be divided into several distinct categories under two overarching categories:

The latter is usually created by translocations, inversions, insertions, or marker/ring chromosomes. While conventional (G-banded) chromosome analysis can theoretically detect all these aberrations on a single cell level, it does not offer high enough resolution analysis given its dependency on cell type and ability to view the abnormality under a microscope.

In turn, although chromosomal microarray analysis can offer high-resolution detection of copy number abnormalities, by virtue of being a comparative approach between patient and control (comparative or in silico), it cannot detect balanced structural rearrangements that have no copy number consequences.

A Need for New Cytogenetic Technology

In the last 50 years, our ability to study chromosome structure and behavior was largely facilitated by the advancement of banding techniques, which in turn allow for the distinction of chromosomes by specific banding patterns. Augmenting these processes, the development of fluorescence in situ hybridization (FISH) in the early 1990s enabled the targeted analysis of individual genomic loci and allowed cytogeneticists to interrogate genomic rearrangements in a more disease-specific manner.

Within the last decade, chromosomal microarray analysis (CMA) has revolutionized cytogenetics in its ability to provide high-resolution analysis of copy number abnormalities abrogating the need for cell culture and labor-intensive microscopy. While all these techniques are valuable and can be used in different clinical scenarios, each of them presents its own challenges:

Therefore, from both an operational and a technological perspective, there is a need for a new cytogenetic technology that utilizes the expertise of cytogeneticists for chromosome biology but provides an automated view of the genome allowing the simultaneous detection of CNVs and SVs.

Optical genome mapping (OGM) is a novel technology that utilizes labeled, high-molecular-weight DNA, which is subsequently electrophoresed into nanochannels and linearized for imaging. Images are then processed to create consensus genome maps of the sample representing different alleles. The patient’s unique map is then aligned to the reference genome and any differences in copy number or changes in neighboring sequences compared to the reference genome is acknowledged by the system software.1 The overall turnaround time does not exceed 7-10 days, which is comparable to, and in some cases faster, than other cytogenetic technologies (see FIGURE 1). 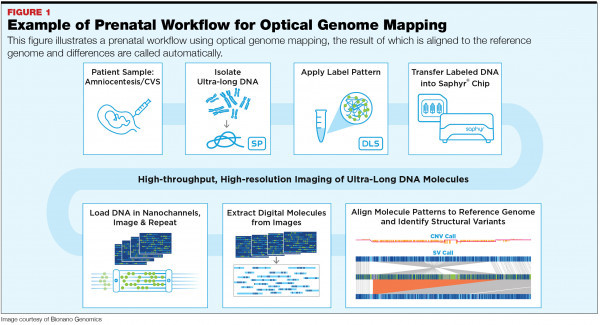 To date, multiple studies have demonstrated the equivalence in performance of OGM compared to chromosome analysis, FISH, and/or CMA, and in allowing the detection of additional clinically relevant findings both in constitutional and somatic human disease.2-4 For example, a multicenter evaluation of OGM involving 100 patients with acute myeloid leukemia (AML) has not only demonstrated 100% concordance with current cytogenetic techniques, but also showed improved breakpoint determination of detected genomic aberrations and detection of novel rearrangements, thereby changing the patient’s risk stratification and enabling eligibility for additional clinical trials.2

From a clinical perspective, this novel technology presents a huge advancement in the evolution of the field of cytogenetics. Its ability to stand out as a unique technology for the detection of all classes of clinically significant, genome-wide CNVs and SVs, in addition to large repeat-rich regions, makes it extremely valuable for adoption in the cytogenetics laboratory. Taking advantage of the molecular-like workflow combined with cytogenetic expertise and interpretation ideally places this technology as the next-generation cytogenetics.

Moving forward, the continued establishment of clinical utility and validity using different specimen types and disease models, and involving large patient cohorts, remains necessary. The application of OGM to pre-conception (infertility), prenatal, postnatal, and oncology workup can mitigate the need for multiple testing algorithms. In addition, acknowledgement of this novel technology by both private and public payers will pave the way for its adoption at a larger scale, thereby enabling improved laboratory workflow and efficiency, as well as diagnosis of human disease.

Yassmine Akkari, PhD, FACMG, is the scientific director of cytogenetics and molecular pathology at Legacy Health in Portland, Oregon. As part of her responsibilities, she and her team of cytogenetic and molecular technologists oversee clinical genetic testing including conventional cytogenetics, chromosomal microarray analysis, and FISH on all specimen types, as well as somatic next-generation sequencing and infectious disease. Yassmine is currently serving as the President of the Cancer Genomics Consortium, the Vice Chair of the CAP/ACMG Cytogenetics resource Committee, Vice Chair of AMP’s Training and Education Committee, and is a member of the Children’s Oncology Group Cytogenetics Committee. She has published more than thirty peer-reviewed articles and two book chapters.

Navigating the Blood Supply During the COVID-19 Pandemic

The Promise of Next Generation Cytogenetics: Optical Genome Mapping 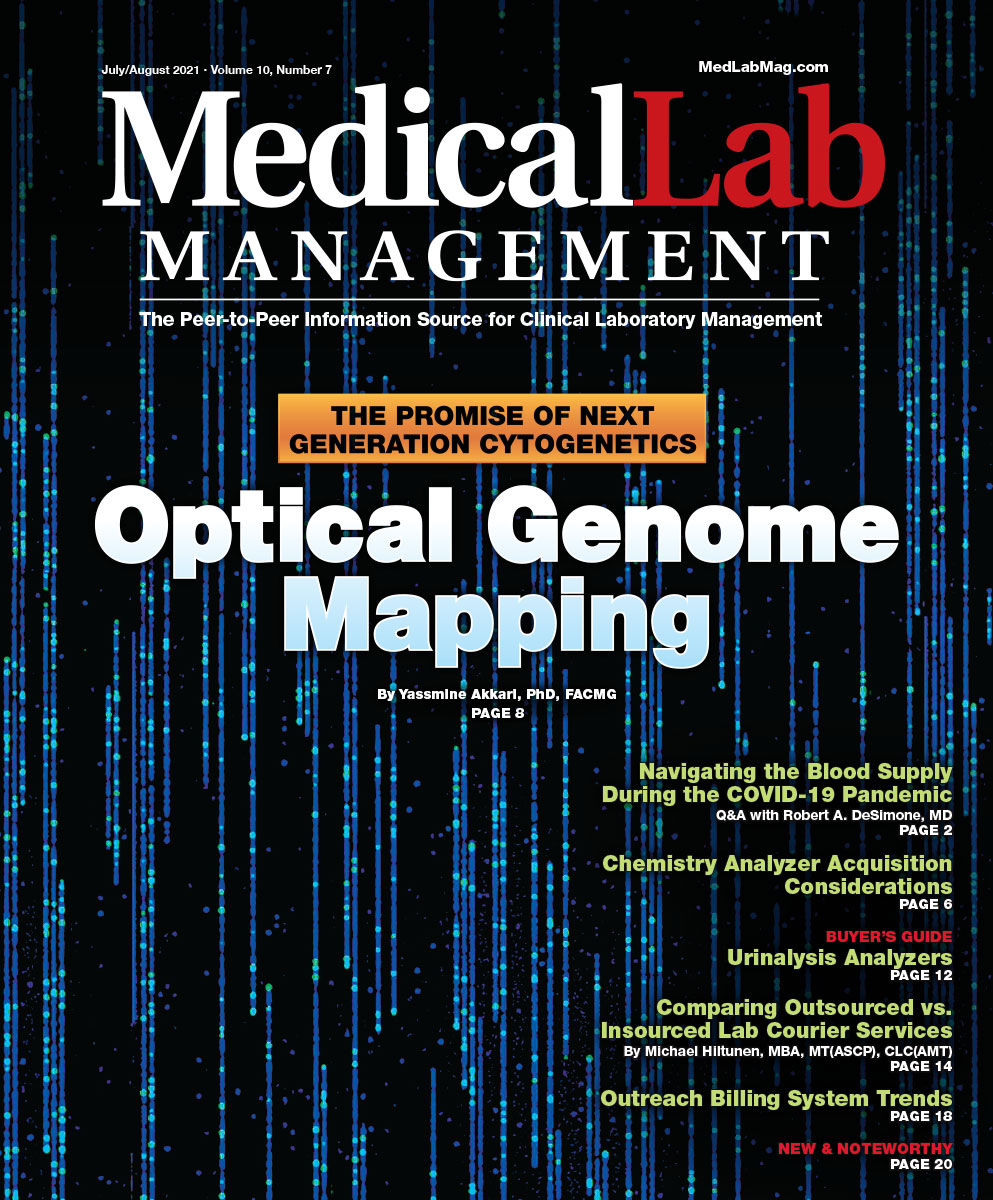