Opioid-Overdose Epidemic in Its Fourth Wave 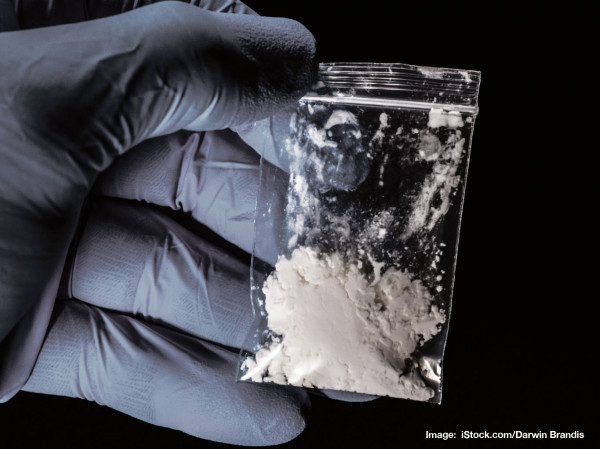 Since 1999, over 750,000 people in the US have died from a drug overdose involving an opioid.1 The first wave of deaths was driven by rapid growth in the prescription of opioids and the arrival of OxyContin in the mid 1990s. This wave then migrated from prescription pills to injected heroin in the mid-2000s (see FIGURE 1). While the number of heroin-related deaths began to drop in recent years, the total number of drug-related deaths accelerated even further in the last decade due in large part to the rapid spread of fentanyl and fentanyl analogs—a group of synthetic opioids that are at least 50 to 100 times more potent than heroin and morphine.2 Of greater concern is the recent trend showing an increase in synthetic opioid-related deaths, with the US Centers for Disease Control and Prevention (CDC) reporting a 10% to 53% increase year-over-year since 2017.1 This more recent and dramatic increase is largely being driven by the rise of stimulant (ie, methamphetamine and cocaine) and synthetic opioid co-use, in what experts are now calling the “fourth wave” of the opioid epidemic. 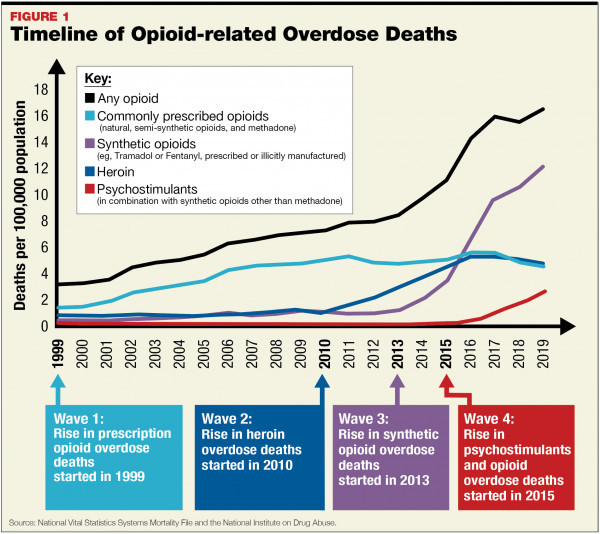 Co-use of fentanyl and other more potent analogs are largely responsible for this recent uptick in drug-related deaths in the US, and this issue is quickly becoming a global crisis.1 Following the lead of clinical laboratories worldwide that responded to the emergence of SARS-COV-2 by rapidly creating tests to help detect the virus and limit the effects of the pandemic, clinical laboratories can play a major role in detecting fentanyl and its analogs to aid in our collective fight against this deadly opioid epidemic.

Fentanyl and other potent analogs (eg, sufentanil, alfentanil, remifentanil, and carfentanil) were first created by scientists at Janssen Pharmaceuticals who were searching for a more effective alternative to morphine for general anesthesia and pain relief.3 It has been used as an intraoperative anesthetic since the 1960s and for chronic pain management since the late 1990s.3 Fentanyl is certainly not a new drug, but as clandestine laboratories started producing it—one of the first being discovered in Wichita, Kansas in the 1990s—it was periodically found in heroin batches called “Tango and Cash” and sold in mixtures to unsuspected users as heroin. Today, there are over 200 fentanyl analogs, with several, such as carfentanil, having much greater potency than fentanyl (100x), and absolutely overpowering morphine (10,000x). In general, these analogs share four structural features that can be modified:4

As a result of these modifications, some fentanyl analogs are so similar to fentanyl that they can be detected by fentanyl immunoassays, while others may not be recognized by the antibodies developed to the original fentanyl molecule and would therefore require mass spectrometry-based methods specifically designed for their detection.

On the evening of June 23, 2016, twelve patients were brought to our emergency department at Yale-New Haven Hospital after consuming a white powder they were told was cocaine.5 Some of these patients required doses exceeding 4 mg of the opioid antidote naloxone, and three died. At the time, our clinical laboratory did not have a rapid method to test for fentanyls, as these are not picked up by traditional opiate screening immunoassays. Ultimately, follow-up testing with a reference toxicology laboratory helped us analyze the urine samples to confirm the presence of fentanyl. The problem is that it took several days to get the results back, and by that point, the information was only helpful for surveillance purposes.

This is not a problem unique to New Haven, Connecticut. Fentanyl overdoses have spread throughout the country, stretching to Fresno, California, for example, which reported a similar crisis in January 2019.6 As a result of this worrisome trend, our ED physicians urged us to emphasize the development of tests that can quickly detect fentanyls in urine, without having to send the sample to a reference laboratory. We responded by bringing in the only automated fentanyl immunoassay available at the time, which was not yet cleared by the US FDA, and validated it as a laboratory-developed test (LDT).

Today, there are three FDA-cleared urine fentanyl immunoassays that clinical laboratories can choose from.7 These assays have varying sensitivities, specificities, and cross-reactivities to different fentanyl analogs. Clinical laboratories implementing these assays or choosing a non-FDA-cleared assay should pay special attention to the performance characteristics of the chosen assay and its ability to detect different fentanyl analogs. Adding a result comment to indicate that false positives are possible with immunoassays and referring all presumptive positives for definitive testing by mass spectrometry may be prudent. This is especially important for clinical laboratories planning to offer this test as part of a larger urine drug screen panel. Common examples of interferences with fentanyl immunoassays include risperidone and 9-hydroxyrisperidone, but not all assays are affected.8 Our clinical laboratory recently added urine fentanyl testing to the general urine drug screen panel in order to improve our ability to detect fentanyl use in our region.

Mass spectrometry is regarded as the gold standard technique for the analysis of drugs of abuse in biological fluids due to its superior sensitivity and specificity.9 However, its cost and complexity can preclude it from being used routinely by many clinical laboratories. Thus, this technology is most commonly found in major academic centers, reference laboratories, and specialty toxicology laboratories. As a result, it can take multiple days to report toxicology results by mass spectrometry, which is not very helpful in an emergency setting. Therefore, immunoassays are generally used as a first-line test to screen patients and provide presumptive results, while mass spectrometry is used reflexively as a second-line test for confirmation and surveillance purposes. However, mass spectrometry often plays a larger role in pain management and drug monitoring programs because results are not needed as quickly, yet accuracy is very important, as patients can be discharged from pain management programs based on these results. In those settings, mass spectrometry may serve as the only mode of testing.

Laboratories choosing to bring in mass spectrometry testing for drugs of abuse monitoring should familiarize themselves with the different types of mass analyzers and how they can be used. The most common type of mass spectrometers used for confirmatory purposes are liquid chromatography-tandem mass spectrometers (LC-MS/MS) with triple quadrupole mass analyzers. These are ideal for targeted quantitative analysis and allow laboratories to design methods to detect specific drugs of interest. Another less common but more powerful (and expensive) tool is high resolution mass spectrometers with orbitrap or time-of-flight (TOF) mass analyzers. These are ideal for untargeted qualitative analysis and allow laboratories to screen for a large array of drugs and metabolites (greater than 1000) at once using a library that can be updated regularly as new drugs are discovered.10

This technology is the most powerful tool we have for surveillance purposes because it can broadly detect compounds of interest and is regularly updated, but it is also the most expensive (see TABLE 1). Clinical laboratories interested in implementing these technologies to measure fentanyl also should consider taking advantage of the Fentanyl Analog Screening Kit (FAS Kit) and Emergent Panels (FAS V1, FAS V2, and FAS V3) that contain over 212 fentanyl compounds and are provided by the CDC to labs with a valid DEA registration for Schedule I controlled substances.11 Our laboratory is currently expanding our existing LC-MS/MS confirmation method to include fentanyls and analogs, while also researching novel mass spectrometry-based techniques that do not require sample preparation or chromatography so we can provide more rapid and accurate results to our ED. Point-of-care testing by mass spectrometry for drugs of abuse is an area of significant need, but I am optimistic that advancements in this area will materialize in the near future due to the miniaturization of mass spectrometers and the optimization of ionization techniques for that purpose.12

With these considerations in mind, what can clinical laboratories do to help? The following are a few key recommendations as pertain to fentanyl testing:

This can happen when the targeted mass spectrometry methods used are not developed to detect a large variety of fentanyl analogs. For example, while fentanyl and norfentanyl can be negative by confirmation, other fentanyl analogs present in the sample may trigger a positive result on immunoassay but be missed by the mass spectrometry-based method because the performing laboratory did not develop the method to look for those.

The reemergence of fentanyl and its analogs in the US and globally is a worrisome trend. The number of opioid-related deaths will likely continue to accelerate unless innovative solutions are brought forward by law enforcement, regulatory agencies, and health care institutions. Our responsibility as clinical laboratory leaders is to ensure we provide the best tools at our disposal to help detect drug use in our general population and to properly educate our clinical providers on how best to utilize those tools.

For More Info on Drugs of Abuse Testing

Opioid-Overdose Epidemic in Its Fourth Wave

Become the Outreach Laboratory of Choice 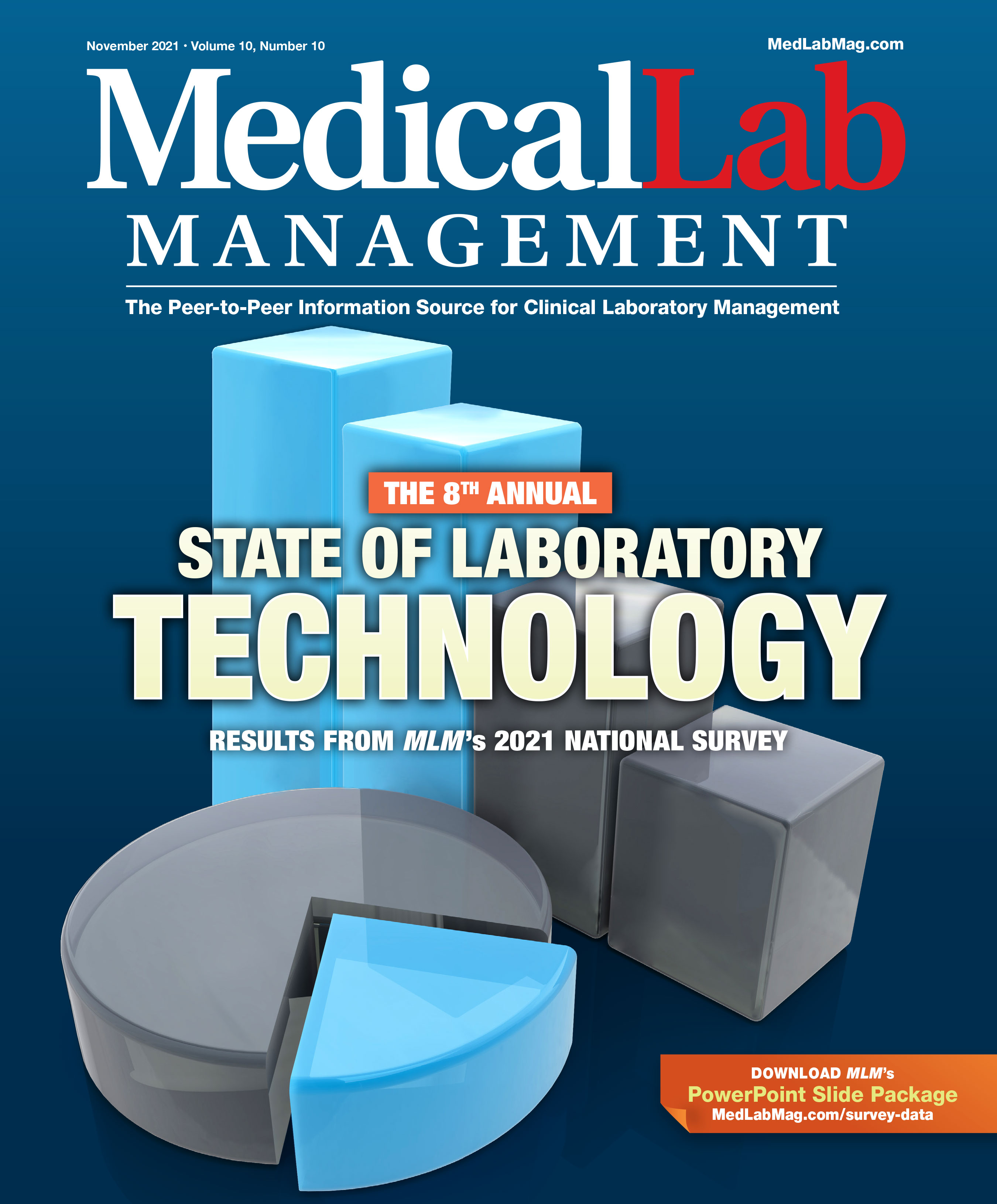